What is milk thistle?

Milk thistle, otherwise known by its binomial nomenclaure Silbuym marianum, is an annual or biennial plant native to southern Europe, southern Russia, Asia Minor, North Africa, and some parts of North and South America [1]. It is a member of the Asteraceae family, to which sunflowers and daisies also belong. The milk thistle plant is distinguishable by its reddish-purple flowers and white-veined, spiny-edged green leaves. Its stem is hollow, and the entire blooming body of the flower can grow up to 200 centimeters tall [2].

Milk thistle’s medicinal properties have been appreciated for centuries, with the earliest use recorded by Greek physician and botanist Dioscorides (between 40-90 AD) [2]. For more than two thousand years, tinctures and extracts from milk thistle have been utilized to treat afflictions of the liver, kidneys, and spleen [3]. The plant is perhaps most well-known for its hepatoprotective (which refers to the process of alleviating or preventing damage to the liver) properties, and is popularly used as a complementary treatment for individuals who suffer from non-alcoholic or alcoholic fatty liver disease, hepatitis, cirrhosis, and/or liver cancer [4].

Milk thistle for liver disease treatment has been well-documented and extensively researched [5]. A 2016 literature review published by the Journal of Clinical Liver Disease examined the existing clinical evidence indicating milk thistle’s ability to prevent hepatic oxidative stress and thus prevent liver disease. One study cited by this review, conducted at the University of Washington, Seattle, found that a treatment of silybin (milk thistle’s primary active compound), vitamin E, and phospholipids for six months significantly improved both insulin resistance and plasma levels of liver enzymes in patients with nonalcoholic fatty liver disease [6][7]. The researchers concluded that, though the exact hepatoprotective mechanisms of silymarin formulations is still being elucidated, further trials were strongly recommended [6].

In a report presented by the National Center for Complementary and Alternative Medicine, researchers found that, among six published clinical studies of milk thistle for alcoholic fatty liver disease, four observed significant improvement in at least one aspect of liver health [8].

Silybin is also known to be an antidote to amanitin, a peptide found in the mushroom Amanita phalloides, colloquially known as “death cap.” Ingestion of this mushroom results in acute liver failure, which milk thistle has the capacity to inhibit [6].

For all these reasons, milk thistle has been utilized as a prominent “liver tonic” for several centuries. Specifically, silybin is popularly used as a complementary treatment in alleviating symptoms of alcoholic liver disease, nonalcoholic fatty liver disease, cirrhosis, and/or viral hepatitis [9].

An in vitro study published by the Journal of Agricultural and Food Chemistry evaluated the effects of silybin (along with the flavanones silichristin, silidanin, silibinin, and isosilibinin) on LDL (low-density lipoprotein, or “bad”) cholesterol and found that its oxidation was inhibited by up to 86%. The researchers hypothesized that, through free radical scavenging and antioxidant mechanisms, milk thistle may yield a significant positive effect on cardiovascular health and recommended further in vitro and in vivo studies [10].

Recent research has also indicated that milk thistle may have a protective effect against chemical-induced cardiac disorders. A 2016 study published by the Iranian Journal of Basic Medical Sciences found that silybin has the capacity to act as a cardioprotective agent in situations of cardiac oxidative stress induced by environmental pollutants and/or drugs such as doxorubicin [11].

Aside from its hepatoprotective properties, milk thistle has become well-known in recent years for its hypoglycemic and hypolipidemic potential. In a study published in 1993 by Current Therapeutic Research, researchers found that silybin reduced lipoperoxidation (or the degradation of lipids) in diabetic patients suffering from cirrhosis. Further, silybin decreased the need for exogenous insulin by increasing the sensitivity of insulin receptors and restoring the plasma membranes of liver cells in cirrhotic patients [12]. After a daily dose of 600 mg of silybin for six months, the same patients revealed a significant reduction in blood glucose levels without any increase in hypoglycemic episodes {13}.

A 2006 study published by Phytotherapy Research produced similar results. A sample of twenty-five diabetic patients were treated with 200 mg of a silybin extract from milk thistle thrice daily for four months. Researchers observed a decrease in blood glucose levels, as well as total cholesterol, HDL and LDL cholesterol levels, and triglyceride levels [13][14].

In a 2013 study published by Current Drug Targets, researchers evaluated milk thistle’s therapeutic potential in a mouse fracture healing model. Results indicated that silybin facilitated tibial healing by elevating bone mineral density levels and osteocalcin levels, the latter of which is an imperative hormone in bone-building and repair [15]. The researchers suggested that milk thistle is likely useful in the treatment of osteoporosis, particularly for postmenopausal women.

How Does Milk Thistle Work?

Milk thistle’s primary active component is a flavonolignan called silybin, which has been demonstrated in vitro hepatoprotective, antioxidant, and possible anti-cancerous activity [2]. Silybin’s structure is comprised of two primary units. The first is a taxifolin, which is an anti-inflammatory enzyme and a potential chemoprotective agent, and the second is a phenylpropanoid, which has antimicrobial and antioxidant effects [18][19][20].

When orally ingested, silybin undergoes rapid enterohepatic circulation, which means it is quickly metabolized into the liver and then excreted via biliary acids [18][21]. Though silybin demonstrates poor water solubility, it is significantly more soluble in organic solvents, such as ethanol and glyceryl monooleate, a food emulsifier. Its absorption efficiency in the gastrointestinal tract depends on the presence of other substances, such as fats, proteins, or other flavonoids. Silybin’s bioavailability can be increased by the co-presence of certain solvents, such as phosphatidylcholine, vitamin E, or bile salts [18].

How do I take milk thistle?

How To Make Milk Thistle Tea

How much milk thistle should I take?

A safety assessment of silymarin flavonoligans (which include silybin) in healthy patients confirmed that the milk thistle extracts were well-tolerated in patients at up to 525 mg daily for twenty-eight days [24]. Most physicians advocate a thrice-daily administration of between 100-200 mg of milk thistle alongside meals [25]. It is advisable to read the ingredients of any purchased supplement very carefully. If the milk thistle extract or capsule does not contain at least 70% silybin, its boactivity will be greatly reduced, thus inhibiting its potential health benefits [22]. The highest quality and best milk thistle supplement products will usually contain between 85-95% silybin [26].

How long does milk thistle take to work?

Peak concentrations of silybin in the liver occur about two to four hours after administering an oral dosage. The total duration of effect is approximately six hours [27].

Milk thistle is generally recognized as safe. However, there are adverse side effects associated with this supplement. Unwanted side effects attributed with oral supplementation of milk thistle include headache, insomnia or malaise, gastrointestinal distress, rash or eczema, and/or joint pain. In the most severe cases, rhinoconjunctivitis or anaphylaxis were suffered as a result of allergic reaction [8]. Individuals who are allergic to chamomile, chrysanthemum, daisies, artichoke, or ragweed should not attempt to take milk thistle [28].

While some individuals advocate for the use of milk thistle as a treatment for morning sickness, the supplement’s safety for pregnant and/or breastfeeding women is clinically unverified. Further, kids should not ingest milk thistle extract without medical supervision, as this substance is also unproven to be safe for children [29].

Milk thistle is contraindicated with some hepatoprotective and hepatorenal medications, antiretrovirals and antivirals, anticancer agents, anti-inflammatories, hormonal medications such as estrogen and fertility agents, cholesterolemia medications, penicillin, phenytoin, talinolol, amiodarone, and irinotecan. Given the high quantity of contraindications, it is advisable to review your present regimen of medications thoroughly with your doctor before starting a routine of milk thistle supplementation [22].

Though research is very limited, there is a small amount of evidence to indicate the possibility of milk thistle being an anti-obesity agent. A recent study published by the Journal of Medicinal Food revealed that 200 mg of silybin improved blood glucose levels and facilitated weight loss in a group of patients with type 2 diabetes. However, these individuals were also being administered a blood glucose medication called glibenclamide. Therefore the exact impact of milk thistle administration alone on these individuals is unclear [30].

Can milk thistle cause body odour?

Milk thistle tea has a smooth texture and a mildly bitter taste to it. For this reason, individuals often add honey or sugar to their blend [32].

Should I take milk thistle before or after drinking?

Because of milk thistle’s potency in treating alcoholic fatty liver and other alcoholic liver diseases, many opt to take milk thistle both/either before and after drinking. In fact, some anecdotal evidence points to milk thistle as a “hangover cure.” However, no peer-reviewed research has verified that milk thistle can ameliorate the unpleasant side effects associated with hangovers [33].

Some researchers have suggested that milk thistle and alcohol may be dangerous when combined directly, so a better option might be to ingest milk thistle the following morning after drinking with a meal, water, and a multivitamin. Again, more clinical research is needed in this area [34].

Which of the following is better/what’s the difference?

Blessed thistle and milk thistle are frequently confused for one another, though they are entirely different plants [35]. Both thistles are members of the family Asteracae, but their medicinal properties diverge. While milk thistle is primarily known for its hepatoprotective qualities, blessed thistle is first and foremost an herbal galactagogue, or an agent that promotes lactation [36]. Blessed thistle has a relatively low side effect profile, but if taken in excess of 6 grams daily, it can cause gastrointestinal distress and vomiting [35].

The common dandelion, or Taraxacum officionale, is a member of the family Asteracae, and is easily recognizable for its vibrant yellow flowering body [36]. Both dandelion root and milk thistle are considered hepatoprotective herbs [37]. Sometimes these two herbs are taken in conjunction for the purposes of liver and gallbladder health. However, there is less clinical evidence to validate dandelion’s efficacy as a hepatoprotective agent in comparison to milk thistle’s [38]. Dandelion root may interact with psychiatric medications such as lithium, as well as some antibiotics and antacid medications [39].

TUDCA is the shorthand form of tauroursodeoxycholic acid, a bilic acid that demonstrates significant potency in countering toxicity and acidic buildup in the liver [40]. There is also some evidence to indicate that TUDCA may be effective in the treatment of acute myocardial infarction, spinal cord injury, and even obesity [41]. Milk thistle and TUDCA both offer many of the same health benefits based on the active ingredient silybin, but comparatively TUDCA is more easily absorbed [42].

Berberine refers to a bioactive compound that can be isolated from several medicinal plants, including barberry, goldenseal, Chinese goldthread, and Oregon grape. Its numerous health-promoting properties include antimicrobial, antifungal, and anti-inflammatory mechanisms, as well as management of biliary acid secretion [43]. There is also some evidence to indicate that it can decrease insulin resistance by managing liver glycolysis and reducing free fatty acid synthesis in the blood [44]. However, berberine is known to have some significant drawbacks, including inhibition of muscle growth and DNA damage possibly resulting in metastasis. In order to combat these side effects, some individuals taking berberine supplements also take milk thistle. The latter plant’s antioxidant properties appear to counteract these negative aspects of berberine [45].

Denamarin is a hepatoprotective supplement designed for pets. It uses milk thistle’s primary bioactive component, silybin, as an active ingredient in its chemical makeup [48]. Denamarin contains a chemically altered form of silybin called S-adenosylmethionine, which increases the biosynthesis of the antioxidant glutathione and thus alleviates liver damage. When receiving a veterinary prescription of denamarin, pet owners will typically administer one tablet to their cats or dogs an hour before eating [49].

Be the first to review “Milk Thistle” Cancel reply 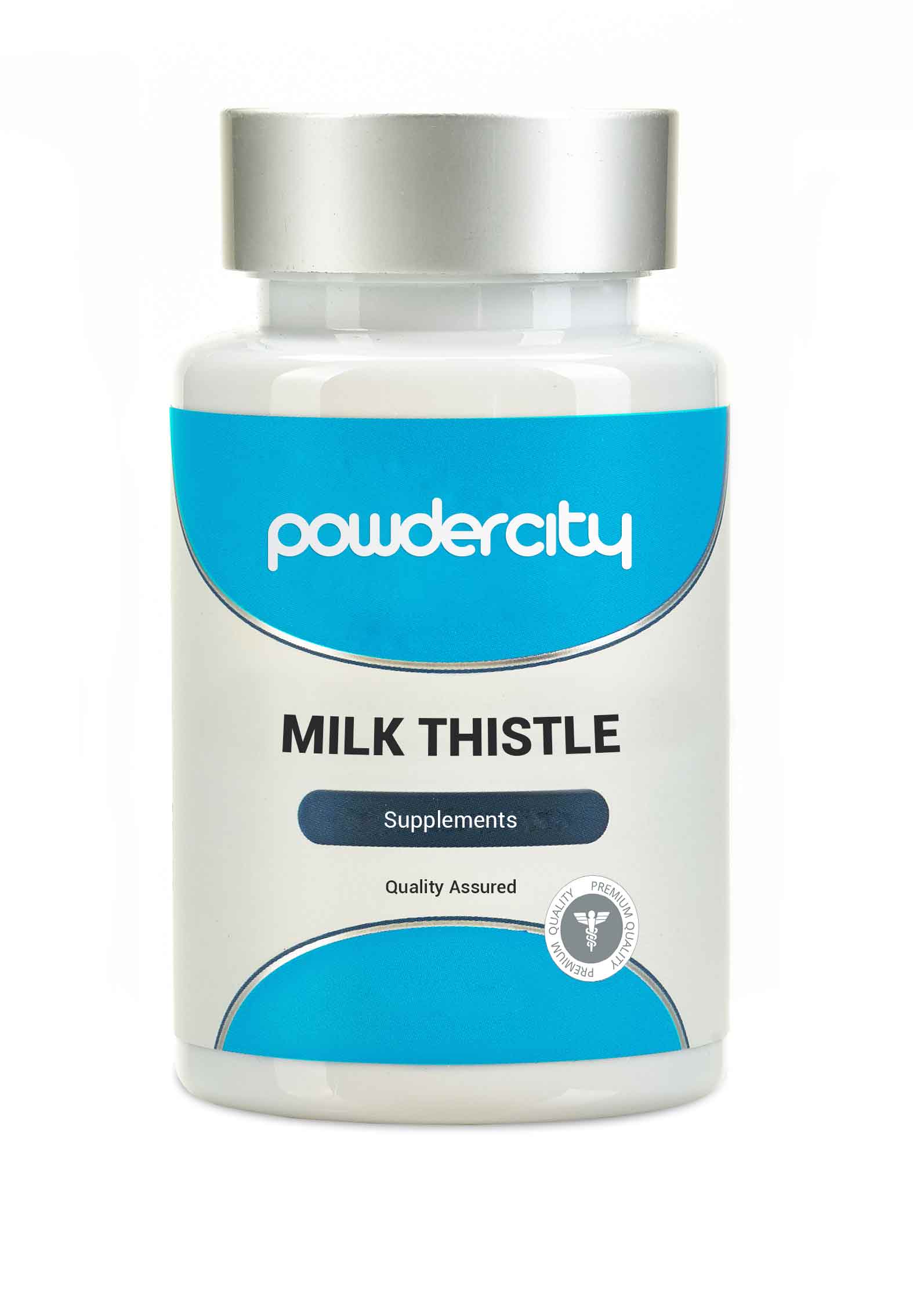