Creatine, less commonly known as α-methyl guanidine-acetic acid, is a chemical that helps regulate energy production in the brain and muscle cells. Our bodies produce creatine naturally, but it can also be taken as a dietary supplement to enhance your exercise performance and increase your fat-free mass. [1] Since creatine is present in all vertebrates, meat eaters also consume creatine through their diets. [2] The majority of our bodies’ creatine resides in skeletal muscles in the form of phosphocreatine, or creatine phosphate, but about five percent is stored in the brain, kidneys and liver. [3] Consequently, adding to your existing creatine stores can have numerous positive physiological and cognitive effects.

Research suggests that creatine supplements can have a number of uses including:

Taking creatine supplements increases your muscle’s supply of phosphocreatine, or PCr, which assists in the production of ATP. [4] Since ATP is your cells’ source of energy, it’s believed that consuming creatine can improve your strength during high-intensity workouts. [5]

When combined with a consistent strength training program, creatine has been proven to amplify the growth of new skeletal muscle in men. [6] Men who do heavy resistance training also saw increased fat-free mass after taking creatine. [7] Creatine reduces levels of a protein called myostatin that inhibits new muscle growth. [8]

One meta-study concluded that adding a creatine supplement to a training program could result in an 8 percent increase in muscle strength, a 14 percent increase in weight lifting performance and a stunning 43 percent increase in one-rep bench press maximums. [9] [10] Taking higher doses of creatine correlates with increased testosterone, which can have a positive impact on workouts. [11] Creatine also has healing properties: Athletes with knee injuries who were given creatine recovered faster than expected. [12]

Vegetarians who took an oral creatine monohydrate supplement experienced improvements in their working memory and intelligence. [13][14] Similar studies on elderly people and sleep-deprived test subjects produced comparable results. [15] [16] It’s even been suggested that creatine supplements can alleviate symptoms of sarcopenia and cognitive dysfunction in older populations. [17]

Parkinson’s Disease patients who were given a creatine monohydrate supplement saw improvements in upper body strength and greater gains from resistance training. [18] A combination of creatine and coenzyme Q 10 might slow the loss of cognitive function in patients with PD-MCI, or Parkinson’s Disease-Mild Cognitive Impairment. [19] Mouse studies suggest that creatine can also prevent the sudden drops in dopamine levels that are common in Parkinson’s patients. [20]

Creatine’s ATP boosting ability also has neuroprotective effects. [21] For example, in a study of women with major depressive disorder who were unresponsive to traditional antidepressants, a creatine supplement successfully improved their symptoms. [22] Creatine also suppresses a biomarker called 8-hydroxy-2-deoxyguanosine, which is associated with Huntington’s disease. [23]

Women who took creatine for just five days demonstrated a delay in neuromuscular fatigue. [30] Tests on men showed similar results: Endurance-trained male athletes who took a creatine supplement reported less leg fatigue after exercising in outdoor heat. [31] In a study of sleep deprived patients, subjects who had been awake for 24-hours saw an improvement in mood and performance on tasks requiring the prefrontal cortex after taking creatine. [32]

Creatine supplements encourage healthy heart functions in mice. [33] Creatine also reduces homocysteine, which is associated with heart disease. [34] A daily 20g dose of creatine has been proven to reduce cholesterol by 5 percent, so it may lower your risk for heart attacks. [35]

In one study, creatine significantly decreased the blood sugar of men who were undergoing aerobic training, [36] Consequently, it could have benefits for patients with diabetes who engage in regular exercise. [37]

Since creatine can reduce fat accumulation, it may be beneficial for treating non-alcoholic fatty liver disease by preventing steatosis and lipid peroxidation. It also lowers lipids in the liver cells. [46] [47]

As the body breaks down fats and carbohydrates, it produces adenosine triphosphate, or ATP. As you expend energy, ATP gets converted into adenosine diphosphate, or ADP. The phosphocreatine stored in your cells provides ADP with a phosphate group, which turns the molecule back into ATP. By increasing the availability of phosphocreatine, creatine supplements can hasten the recycling of ADP into ATP. Since ATP is rapidly depleted during exercise, creatine supplements are especially popular among athletes, but their ability to replenish ATP stores is beneficial for a number of medical conditions. [48]

Creatine is also believed to play a vital role in neurological functioning since people whose bodies can’t create creatine on their own suffer from developmental disorders. [49] Although the body’s creatine capacity is limited at any given time, it can increase with muscle mass. [50]

The optimal way to take creatine is to follow a loading protocol, which entails taking high doses for a short period of time followed by smaller daily maintenance doses. [51] The recommended starting amount is 0.3 grams per kilogram of bodyweight daily for three weeks. For most people, that means about 20-25g of creatine each day total split into four or five doses. Individual doses must be spaced throughout the day since taking too much creatine at once can cause diarrhea and nausea. Since it doesn’t have any stimulating effects, it’s fine to take creatine before bed. It’s also OK to take creatine on an empty stomach. Athletes should take creatine on their off days to maintain peak levels. [52]

After the creatine loading period, a daily dose of 3-5g is recommended to maintain optimal creatine levels. People with greater muscle mass may have to take more for the same effect. Taking 20g of creatine per day for a week can increase phosphocreatine stores by up to 40 percent. [53]

Doctors consider creatine safe for everyone. Mild side effects include weight gain, cramps and digestive issues. [54] [55] [56] Researchers also suspect a connection between creatine and hair loss. Although creatine doesn’t cause hair to fall out, it can accelerate hair loss in people who are already balding. [57] Putting creatine in coffee can worsen diarrheic symptoms.

When to Take Creatine HCL

Typical uses are as both a pre- and post-workout drink. This helps to supply needed energy, makes the routine more effective, and then begins to help with the repair and recovery of muscle cells and tissues.*

When considering the various types of Creatine, HCL is water soluble. That means that it is more easily absorbed into the bloodstream, which reduces typical side effects seen in other types of Creatine. Additionally, it may be used continuously without any detrimental effects, and there is no required loading period in order to build up its effectiveness [61].*

Creatine HCL is also much more highly concentrated than other forms. This makes it so that you do not need to take very much in order to receive beneficial effects [61].

“I’ve used Creatine Monohydrate in the past, but due to its digestive tract upset for me, I stopped. I liked the results from Creatine Supplementation, so when I came across this Creatine HCL suggestion in Dr. David William’s newsletter, I thought I’d give it a try. I couldn’t be more pleased with the results. No digestion upset, and have seen results within a couple of weeks. I am 63 years old, lift weights 2 times a week, and do yoga 3 times a week. Creatine HCL gives me the energy for a more rigorous workout. I like the muscle recovery aspect of this product. It does everything the article said it would. I take one scoop (1/8 tsp.) twice a day, in an 8oz. glass of filtered water. One scoop with breakfast, and the second dose before my work out later on in the day. A small amount of product, for huge benefits. I highly recommend Creatine HCL. Thank you Powder City! Great service. Great product.”- Deborah B

“Having read a review on Creatine HCL in Dr. Williams newsletter, I decided to give it a try. I am a weightlifter, and have used creatine in the past with good results, but was put off by the amount of powder you had to take for effectiveness. The thing I like about the HCL version is that you have to take far less. Powder City had great prices, and the delivery was fast. I will definitely make them my supplier of choice.” - James B

“Good product, as expected from all previous orders and products from this company. But the product is very gritty and has a bitter taste. I always mix with a protein shake post-workout and can notice both taste and texture even over my flavored whey. Keep in mind how highly researched this product is and how great the benefits are. Results and price over taste, plus only takes a few swigs to finish off a shake anyway. Again great product for an extremely great price compared to other Creatine HCL sellers and manufactures.” – Ryan

Be the first to review “Creatine” Cancel reply 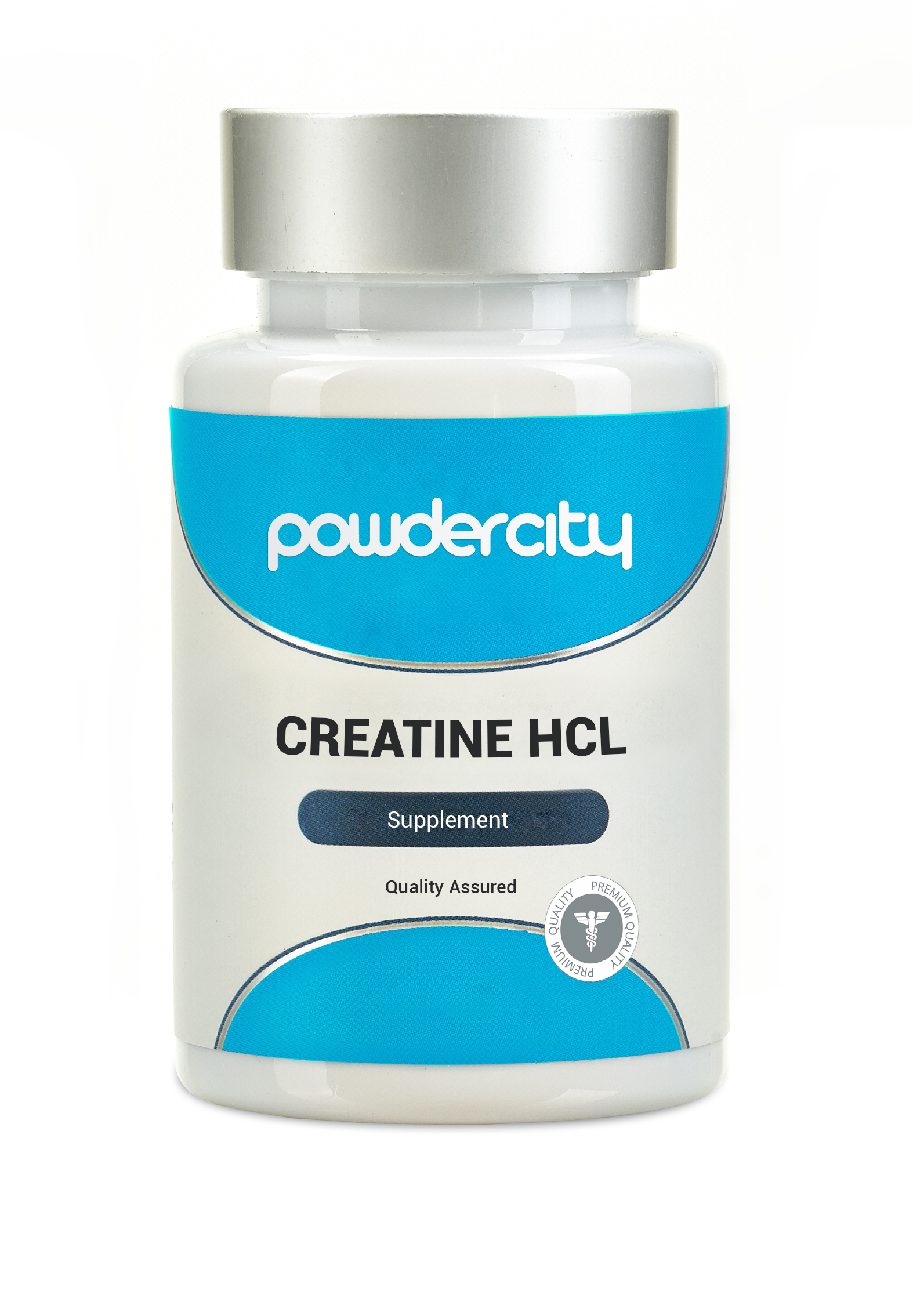