If you or someone you know is experiencing memory loss or other brain-related illnesses, citicoline, also known as CDP-choline, would definitely be worth looking into.

Citicoline was developed in Japan originally and later in Europe by prescription. You can now buy CDP-choline without a prescription as a supplement for brain health and other cognitive conditions, in the US.

Citicoline is one of the best citicoline supplements and is extensively prescribed worldwide.  It promotes the repair and development of cell membranes and also looks promising in many other diseases.

Citicoline is a nootropic drug which is used for enhancing memory or other cognitive functions and citicoline nootropics are often called smart drugs.

The primary reason for supplementing with CDP-choline is to support against cognitive decline and to enhance memory, mainly in elderly people, but there are other reasons as well. [1] CDP-choline nootropics are frequently prescribed by doctors in order to prevent or slow down memory loss associated with dementia and other illnesses.

Citicoline is already produced naturally in the body and is in every cell, especially in the brain; however, the types of food that contain citicoline are limited. Consequently, many people do not have the necessary levels that are required for good health.

Therefore, to obtain the therapeutic citicoline benefits, taking a supplement may be necessary to maintain proper brain function.

In addition to memory loss, supplementing with CDP-choline, benefits and improves general brain health and other illnesses:

Caused by degeneration of the brain.

In one study on humans, after four weeks of administering 30 patients with 1000 mg of citicoline, they saw improvements in cerebral blood perfusion, cognitive functioning, and the bioelectrical action of the brain.  [16] [19]

Four randomized trials were conducted with citicoline on animals, found that citicoline stabilizes the cell membranes, reduces free radical production, and increases the likelihood of recovery after three months. [17]

Studies have shown improvement in behavior problems and memory loss in the short and medium term. [5]

Brain energy has been found to increase by 14% in healthy adults with supplementation of citicoline. [20]

A 28-day trial found that boys taking 250 mg and 500 mg of citicoline showed substantial improvement compared to those who took a placebo. [18]

How Does Citicoline Work?

Cytidine Diphosphate Choline (CDP Choline sodium) supplements cerebral metabolism and studies have indicated it may benefit the efficacy of dopamine receptors. Scientists have established that CDP Choline sodium aids in the body’s synthesis of acetylcholine. Acetylcholine is a neurotransmitter that is associated with the brain’s ability to learn and remember. Acetylcholine facilitates formation of memories. If there is an increased amount of available acetylcholine in the brain, there may be an benefit to memory formation.

Brain cells communicate by neurotransmitters, which are chemicals in the brain. [2] Two of the most important neurotransmitters are acetylcholine, which is associated with learning, memory, and dopamine, which affects concentration and motivation. Studies found that with supplementation, CDP-choline’s effects on dopamine improves brain function. [3]

When a citicoline supplement is consumed, it is hydrolyzed into choline in the intestines. [7] Choline has many functions such as brain development, nerve function, energy levels, and it maintains a healthy metabolism. When taking choline, energy levels can be significantly increased. [13]

Citicoline administration comes in various methods including oral, intravenous, and by injection. [8]

The typical method of taking citicoline is oral, the others are usually administered when the patient is unable to swallow. Pills are the most used oral method; however, another is CDP-choline powder. It can be dissolved in water or any other liquid you desire.  You can also buy citicoline powder in bulk.

If a larger dose is intolerable, experimenting with split dosing may be worthwhile. Supplemental B complex vitamins and folate supplements may aid in the absorption of this product. In order to maximize the effects of your Choline supplementation, consider cycling your CDP Choline sodium with other choline sources, such as Alpha-GPC or Choline Bitartrate.

CDP choline sodium powder dissolves quickly in water and has almost no taste (see results of organoleptic testing below). Mix with water, milk or juice, and drink. You can also use one of our encapsulation kits to make your own capsules.

If you take it with powder, weigh it to determine the correct amount.

It’s advisable to consult your doctor concerning the CDP-choline dosage; however, below is a guideline when taken orally.

With CDP-choline use, side effects are rare and limited. They are thought to be negligible for short-term when taken orally and they usually occur when someone takes more than the recommended amount. If they do occur, it’s typically only mild nausea or diarrhea. Others that could occur are:

A stack is a group of supplements that work together with one another which someone commonly takes each day to support their particular needs. Below we will discuss nutrients that stack well with CDP-choline.

Choline – Choline nootropics are an essential stand-alone nutrient and a very important nootropic. It’s essential for bringing out other cognitive enhancers and an excellent addition to a CDP-choline stack.

Alpha GPC or citicoline— Alpha GPC is a neuroprotective agent that may prevent symptoms of cognitive decline and general cognitive health. As far as citicoline vs alpha GPC, there’s not a lot of difference between the two, but the differences that are present, make Alpha GPC and CDP-choline together work very effectively in a stack. [9]

Piracetam – CDP-choline and piracetam together are effective for cognitive health because when combined, they enter the brain’s cerebral-spinal fluid easily, due to the ability to cross the blood-brain barrier. [11]

Dmae – Can I stack CDP-choline and dmae? Dmae is very similar to CDP-choline but has some dissimilar properties that may decrease aging in the brain and improve memory, although more research is necessary.

Alpha GPC, Noopept, and Citicoline – Nootropics have been shown to enhance both memory and learning. Noopept, citicoline, and alpha GPC benefits the stack and further augments the results. Noopept has been shown to be beneficial in the restoration of cognition as with Alzheimer’s disease. [12]

Some people have remarked that with noopept, no effect is detected. The typical noopept choline dosage would be approximately Alpha GPC choline to 20 X noopept.

It can vary with each person, some taking longer to feel the results, while others feel it right away. However, among most people, it is gradual and one day they realize they feel better.

Citicoline Compared to Other Nootropics

With CDP-choline vs choline, both are produced by the body; however, necessary levels are rarely sufficient for good brain health and supplements are necessary.

In addition, citicoline elevates the levels of a few hormones that can be effective for attention deficit disorder (ADD) and depression.

Choline is related to the B-vitamin and is very important to neurological performance. Citicoline converts to choline in the intestines.

With citicoline vs choline, they are both essential nootropics that the body needs to function.

A question frequently arises of whether there is a nootropic that compares to Adderall. It is commonly thought that citicoline is the answer; however, the one that comes the closest to Adderall is phenylpiracetam.

It provides similar improvements in focus, mood, energy level, memory, and motivation. In addition, it has fewer side-effects and less chance of addiction than Adderall.

These nootropics are very similar and help with cell membrane creation. Basically, they furnish the same results, they just go about it in different ways.

Studies are currently being conducted on pregnancy and citicoline supplementation. [15] At this time, the best rule of thumb is women who are pregnant, or nursing should refrain until further studies are performed.

Determining the best choline supplement for you can be tricky given that there are so many options available on the market. Three popular options are CDP Choline Sodium, Alpha-GPC, and Choline Bitartrate.

Alpha-GPC is often touted as the best choline source, but it has some drawbacks. It is extremely hygroscopic meaning it absorbs water from the air. As a result, it can sometimes solidify. Since it is impractical to store pure Alpha-GPC for long periods, it is often sold at a 50% concentration.

CDP Choline sodium, while not as effective as Alpha-GPC, still provides numerous cognitive benefits. It is able to supplement memory and cellular health. Both Alpha-GPC and CDP Choline sodium are excellent choline sources, and many individuals choose to try out both and see which works best for them.

Choline bitartrate is the weakest of the three, but it is also the most affordable. It does not provide as many nootropic benefits as the other choline sources, but it still provides liver benefits.

Studies have found that CDP-choline has a very low toxicity, showing that as much as 2000 mg have no harmful effects. [10] The main side effects have been mild nausea and diarrhea.

How long for CDP-choline take to work?

Some people claim to feel CDP-choline’s effects right away; however, most people do not feel a definitive change. Instead, after taking it for a while, they realize their memory has become much better.

Food is not the best source of CDP-choline, especially in the USA, due to poor eating habits; however, there is some food that can help to increase the levels:

How long does it take to feel the effectiveness of CDP choline sodium?

Choline sources are non-sensory products so it isn’t something you will necessarily feel as you would a stimulant. Be the first to review “Citicoline” Cancel reply 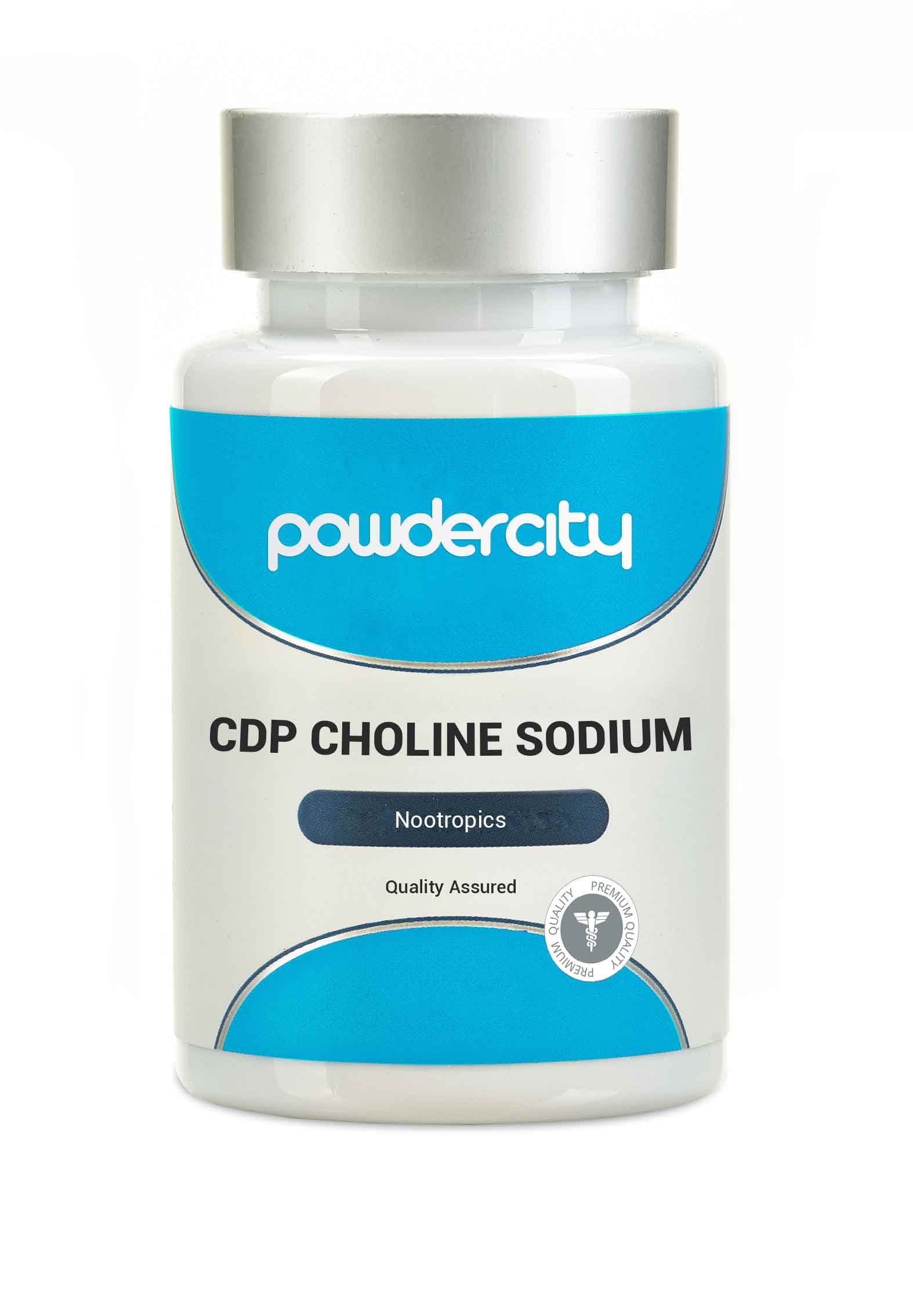