Pramiracetam, otherwise known by its branded title Pramistar®, is a nootropic designed for cognitive enhancement and improved memory retention, attentiveness, and motivation [1].

A 1996 study revealed that those supplemented with pramiracetam demonstrated greater memory improvement than their control counterparts, who received either memory training alone or nothing at all [2].

400 mg of pramiracetam was effective in treating memory retention issues in young men with traumatic brain injuries. Further, the improvement continued during the month-long follow-up period after supplementation was discontinued [3].

Pramiracetam has been demonstrated to be effective against medication-induced amnesia. Pramiracetam was shown to reduce amnesiac effects in both young and elderly subjects [4].

Anecdotal evidence has reported increased focus, motivation, and concentration [5]. Clinical research has not yet verified pramiracetam’s specific action in terms of focus [6].

Reduction in Anxiety (Social and/or Generalized)

Testimonials have reported that taking pramiracetam alongside other nootropics like aniracetam, oxiracetam, and/or piracetam helps alleviate social and/or generalized anxiety [7] [8].

Though some users have described amelioration in anxiety-related and depressive symptoms pramiracetam should never be taken in substitution to prescribed anti-anxiety or antidepressant medications [9].

An early study using rats compared pramiracetam to piracetam in terms of cognitive arousal. Pramiracetam sped up EEG waves in the rats’ frontal cerebral cortexes and dorsal hippocampus [10]. Other results have validated that pramiracetam yields significant elevation in cortical and hippocampal stimulation and arousal [11].

The neurotransmitter acetylcholine plays a significant role in stimulating function in the sensory cortex [12]. Pramiracetam supports production and activity of ACh, which accounts for its ability to enhance sensory processing [13].

One mechanism of action involves the assisted conversion of choline into acetylcholine and the subsequent neuronal synthesis of ACh [14]. Pramiracetam also increases the production and synthesis of nitric oxide in the brain, which has been demonstrated to alleviate age-related memory loss in clinical research [15][16].

Pramiracetam affects cognitive function via the adrenal cortex, which is heavily involved in modulating the body’s response to stressful stimuli [17].

Pramiracetam is reputed to be safe and effective at a daily dosage of 1,200 mg at 400 mg thrice or 600 mg twice per day [1]. Some clinical evidence suggests that a 1,600 – 2,000 mg dosage is fit for daily consumption as well [18]. Pramiracetam is tolerated well even at high dosages.

Pramiracetam can be ingested in a powdered or capsule form. Users often mix a powder dosage of 200-400 mg with milk, olive oil, or a number of other beverages. Pramiracetam powder may cause an unpleasant taste and a slight burning sensation in the throat [10].

Reported side effects of pramiracetam are extremely limited. [19] Pramiracetam is non-toxic and non-addictive. Users can preserve pramirecitam’s long-term efficacy by cycling and taking regular periods off from supplementation [20].

The majority of clinical research studies have reported a lack of side effects in patients administered the nootropic [2][3][94[21].

Anxiety, fatigue, irritability, and/or abdominal discomfort have been reported. Others state that pramiracetam caused them to experience anxiety after stopping supplementation [3322. Users have also described emotional dullness [9].

Be the first to review “Pramiracetam” Cancel reply 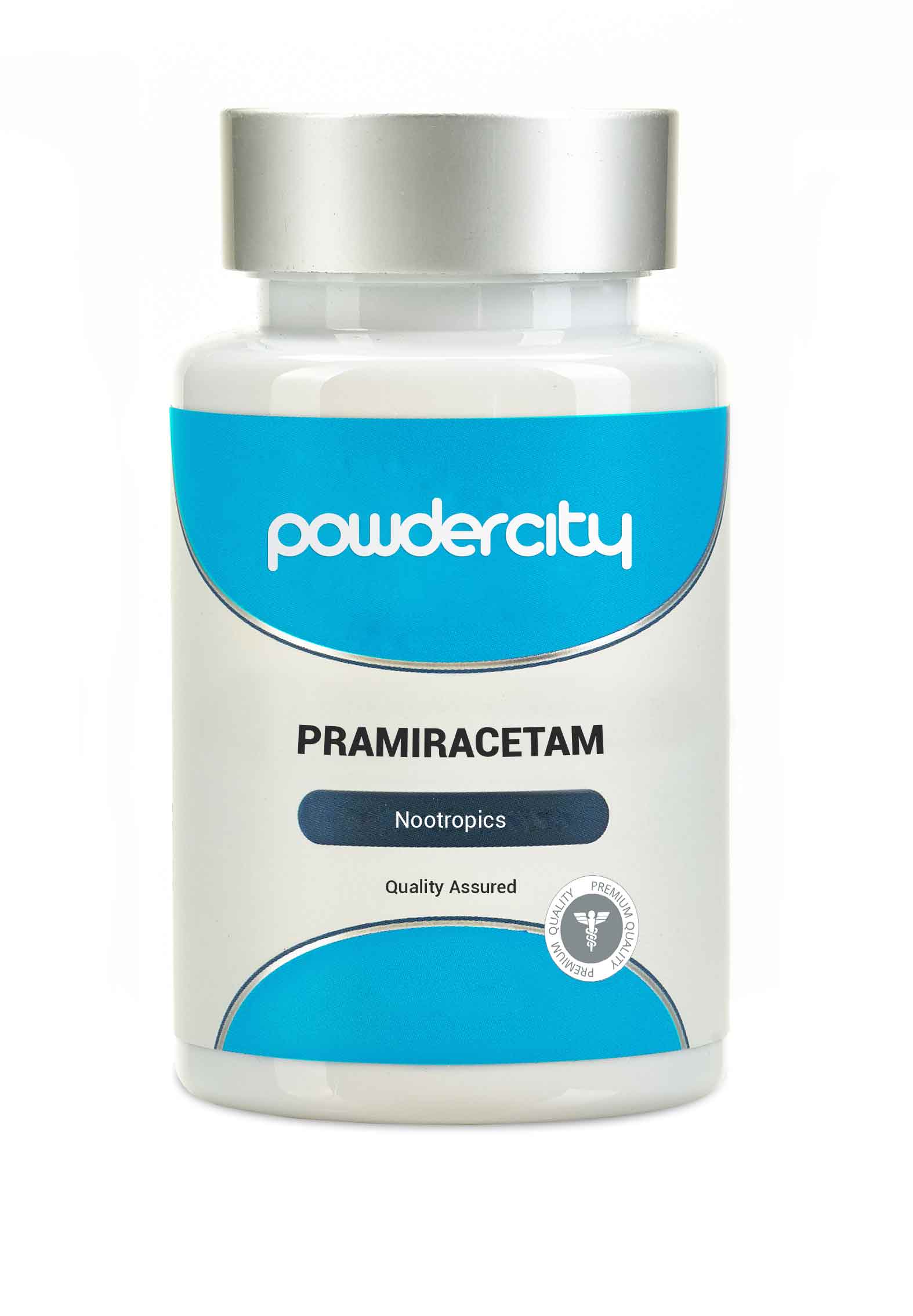